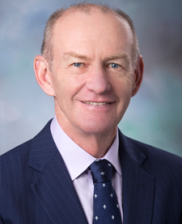 Lieutenant General (Retired) Edward “Ed” Cardon was born in Texas and grew up in Watsonville, California. He graduated from the United States Military Academy at West Point in 1982 and was commissioned as an engineer officer. He has M.S. from both the Naval Command and General Staff College and the National War College.

General Cardon’s service to our Nation spans over 36 years where he honed his profession both domestically and internationally including work in Germany, Bosnia-Herzegovina, multiple combat tours in Iraq, and the Republic of Korea.

General Cardon has extensive experience establishing, leading, and transforming very different organizations with diverse mission sets. He led the creation of a 4000 Soldier brigade combat team and deployed it to Baghdad, Iraq in just nine months. He commanded one of the Army’s premier Infantry Divisions located in the Republic of Korea, and he both transformed and scaled Army Cyber Command into a world-class cyber force. He led the creation and employment of Task Force Ares, an offensive cyber task force oriented against the Islamic State of Iraq and the Levant. His final assignment was leading a task force to create Army Futures Command to lead the modernization of the Army.

Since retirement from the Army, General Cardon has worked across a wide portfolio of Companies, Universities, Government, and Think Tanks with a focus on solving hard problems.